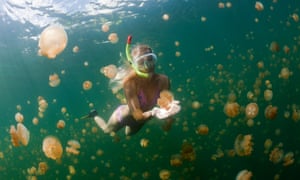 Come on Australia! Time for us to get going on making sure only reef-safe sunscreens are used too! –

The tiny Pacific island nation of Palau will ban “reef-toxic” sunscreens from 2020 in what it claims is a world-first initiative to stop chemical pollution killing its famed corals.

Palau, which lies in the north-west Pacific, east of the Philippines and directly north of Australia, is regarded as one of the world’s best diving destinations, but the government is concerned its popularity is coming at a cost.

A spokesman for President Tommy Remengesau said there was scientific evidence that the chemicals found in most sunscreens are toxic to corals, even in minute doses.’

He said Palau’s dive sites typically hosted about four boats an hour packed with tourists, leading to concerns a build-up of chemicals could see the reefs reach tipping point.

“On any given day that equates to gallons of sunscreen going into the ocean in Palau’s famous dive spots and snorkelling places,” he said.“We’re just looking at what we can do to prevent pollution getting into the environment.”